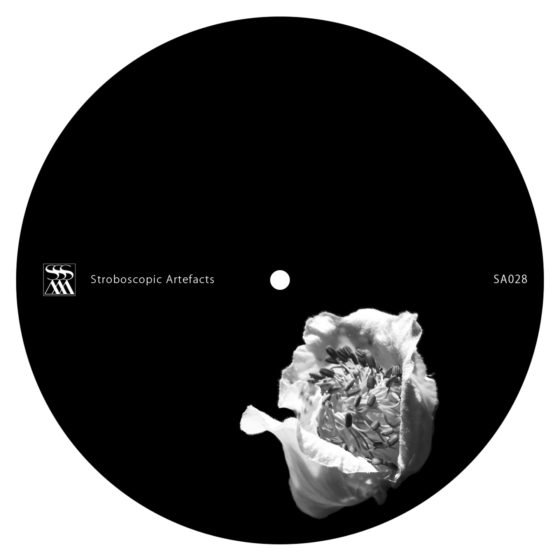 Whereas many electronic producers aim at being the most prolific in their genre, or the most extreme, Lucy and Rrose have wisely chosen to be the most consistently curiosity-provoking representatives of their craft. Their decision to team up as a production duo for the newest Stroboscopic Artefacts EP may have seemed inevitable, given their shared responsibility for shifting techno’s focus towards the facilitation of profound psycho-acoustic effects. And yet, even those who saw this coming will still be in for a wild ride.
Lucy’s skill as a studio technician – displayed capably over his trilogy of full-length albums – has always been enhanced by his skill as a storyteller and as an artist with reverence towards myths and the pull of the unknown. This sonic personality is a perfect complement to the scientific severity of Rrose, for whom the electronic pulse beat and subsonic massage permit entry to a febrile psychic landscape whose contents are never entirely what the individual listener might expect or be prepared for.
As with both of the artists’ solo offerings, these recordings feel as much like the branching off point for new creative acts rather than as objects to be passively enjoyed. As such, the opening “Chloroform” is a somewhat ironic title for a piece that is anything but anesthetic: at high volumes, its monstrous low-end surge and prickly, scintillating sonic ephemera are very likely to bring attention to otherwise imperceptible phenomena. “Peeling” continues in this style with a more urgent tempo, developing its own cascade of sensory impressions from seemingly unstable deep-bass loops, injections of intentional surface noise, and pitch-shifted / harmonizer-effected phantom phrases.
“Stained Glass,” maybe the most straight-ahead piece on the record, is still a potent distortion of the mundane primed with shivering bell tones, tamed feedback and hints of speaker cones fraying. The climactic “Foil Gardens” is an elegant study in harmonics whose time-dissolving ability nods to the works of composers like Charlemagne Palestine or Eliane Radigue, without being a pure homage to either. The undertow of distortion beneath the glistening tone waves, in particular, provides a distinct update to the legacy of so-called tonal ‘minimalism’.
The end result here is a record that feels uncannily lifelike: an organism that always seems on the verge of a heuristic breakthrough, and whose full potential may not even be known by its creators.