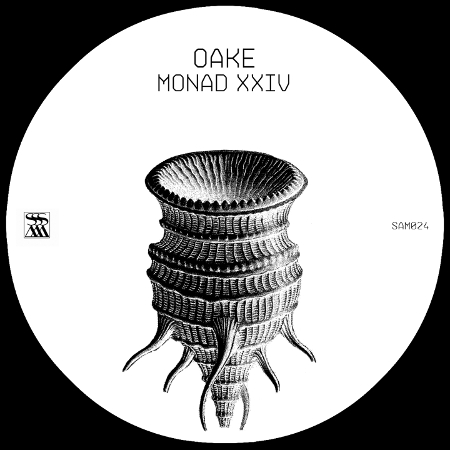 One of the most exciting new movements in modern music involves electronic producers venturing into sonic realms of fear and uncertainty. Though these artists’ unforgiving style places plenty of demands on their listeners, it is devoid of cheap shock value and predictable moralizing, and is capable of finding and creating romance in a grayscale world of Brutalist architecture and all-pervasive automation. While typically associated with the artist rosters of labels like Downwards, Blackest Ever Black and Modern Love, Stroboscopic Artefacts has played just as strong a role in shaping this aesthetic. So it’s only fitting that the next Monad issue from Stroboscopic Artefacts would come from the German duo of Eric Goldstein and Konstanze Bathseba Zippora, – better known as OAKE – whose previous efforts on Regis’ Downwards label have established them as one of the most unique products of their genre.
Like OAKE’s previous work, their new Monad EP immediately establishes a tight hold on the listener’s consciousness with its rigorous balance of ethereal vocal seduction and concussive rhythm, making one feel thrust into a world where the forces of techno-science and magic are involved in a constant reciprocal conversation. The opening track ‘L’esclandre’ while just a harbinger of things to come, is still as intense on its own as anything else in the electronic music realm, ritualistically laying a foundation of heavy kick drums and metallic lashes that seem aimed at key pressure points of the body. The following track ‘Jardin d’évasion’, bringing spoken vocals and haunted sung melodies into the caustic mix, allows the listener to soar over the aforementioned Brutalist landscape while still somehow feeling the full weight of it – a dark musical gem whose vocal repetition of “keeping…awake” elegantly completes a feeling of post-industrial yearning and restlessness.
‘Hélicorde’ returns OAKE to a more stripped-down, rhythmically dominant format; in the process offering a track that seems to have been by some kind of hybrid machine-wolves rather than by humans enhanced with studio technology. The feeling of being ‘on the hunt’ is captured here with great panache, but doesn’t leave the ears so exhausted that they won’t be able to enjoy the breathtaking finale ‘Paysage dépaysé’. Initially powered along by hammering kicks and grinding ambience, a siren voice appears which leads the instrumentation through a number of increasingly intense permutations on the main theme. Immense, yawning dirge tones and dissonant strings combine with the already established presence of pneumatic drill percussion to make a timeless meditation on lost grandeur.