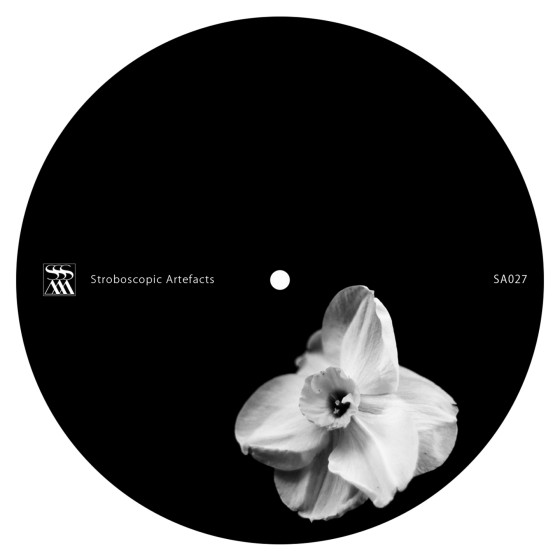 This latest installment in the Stroboscopic saga once again calls upon the talents of two label veterans; both having released EPs on the label while also contributing to its five-year retrospective series. This new split release shared between Kangding Ray and Rrose is a fitting partnership: after all, both individuals are known for advancing the progress of rhythmic electronic music while drawing from creative influences and movements that weren’t typically associated with the ‘techno’ lineage until these producers made such links possible.
Kangding Ray’s side, “Ardent,” is a gripping and propulsive piece formed in the same spirit as the songs from his latest full-length, Cory Arcane. Dramatic and cinematic from beginning to end, it makes the listener and/or dancer feel like a highly alert martial artist slicing and kicking through a host of liquid-metallic adversaries, with disciplined synth bass and rich melodic swells as defensive weapons. Slick and accessible without ever being conventional, “Ardent” convincingly collages stuttering and minced sequences together with steady percolation and smooth, brassy undertones – three different sonic ‘states of matter’ that unify to make Kangding Ray’s musical
imagination into an almost tactile thing.
The entity known as Rrose, meanwhile, presents a track here that reaffirms that artist’s expert skill at crafting perfectly symmetrical and mesmerizing musical palindromes (a skill that can be seen on other standout Stroboscopic Artefacts tracks like “The Stare,” and also on Rrose’s interpretation of James Tenney’s classic palindrome “Koan [Having Never Written A Note For Percussion]).” The track in question, “Swallows,” is appropriately named, impressing upon listeners like the sonic equivalent of a massive searchlight which, once it lands upon its target, swallows or vacuums up the listener’s conscious attention. This elegantly arching set of multiplying and disintegrating waveforms rewards those with the courage to return its insistent gaze and to “play at maximum” volume to reveal the wealth of detail concealed within its deceptive minimalism.
With its scientific exactness and sheer originality, this split is an essential listen not just for fans of either artist, but also for any seeker after new perceptual revelations.